The Rematch to End All Rematches 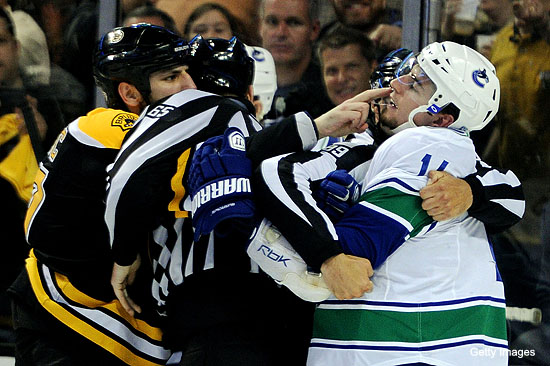 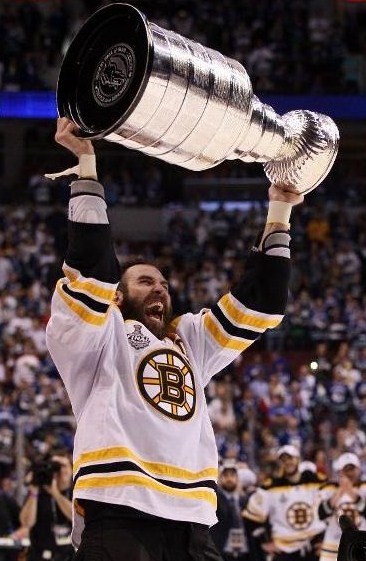 With all the talk about Ryan Braun, his PED use, and how much of a cheater he is, I just have one comment to make.

I can't wait until someone in the Hall of Fame comes out and admits they took some sort of "performance enhancing substance". The outcry will be off the charts and hypocrites will be found left and right. Finally, the end will come to baseball players being burned at the stake by writers and fans for testing positive for drug X. This is stupid.
Posted by Chris Henchey at 11:21 AM No comments:

I hate New Year's Resolutions. They end up being pie in the sky goals that never really happen, and then the next year, the people make the same resolution. And the vicious cycle continues. But, goals for the year, goals are a good thing. Goals are a bit different, in my mind, because they are more tangible than "resolutions". So, without a due, I present to you

HENCHMEISTER'S COLLECTING GOALS FOR 2012!
1. Fully organize my Player Collections with pictures/scans. I have already started this one with my Ryan Kalish PC, but now I need to start doing this for my Wakefield and Ellsbury PCs.
2. Add at least 20 more cards to my Ryan Kalish PC. The current number stands at 27. His stuff can be had pretty cheaply, so this shouldn't be too difficult. I've been pretty lucky this year in being able to pick up a lot of his stuff pretty cheaply (due to injury, I should add), but that might not continue if he gets the starting right field job in June, or whenever he comes back. Hopefully I can pick up his 2008 Chrome Auto before that.
3. Add at least 30 cards plus an Auto/GU card to my Tim Wakefield PC. The current number is 44. This has been sort of surprising to me, as I have made a fair amount of progress with this collection. For whatever reason though, I haven't picked up a "hit" of his. I think I can do better next year.
4. Add at least 50 cards plus an Auto/GU card to my Jacoby Ellsbury PC. The current number is 31. The Eclectic Ellsbury Collection started out very slow, but in the last month or so, it's finally picking up steam with a couple of big trades. His stuff is easily available, so I don't think it will be that difficult to hit 81 by the end of next year.
5. Scale down my collection. I'm gonna be honest, I have way too much stuff. I think in the next week or so, I need to host a giveaway so I can get rid of some stuff. I should also make a few trades to bring in stuff I actually want. And, I need money, so I've started to sell a lot of stuff. But, seriously, I need to get rid of my unwanted cards.
6. Stop impulse wax purchases. Unless it's for a set I need, I don't need it. I don't have a lot of money to spend in the first place, so I shouldn't spend it on cards I don't need or will have any use for.
7. Start an interesting set collection. I just want to start a set that's different from your typical base set. I've been think about doing the 2010 Upper Deck Portrait insert set, or the 2009 Heritage Clubhouse Collection relic set. Both should not be too expensive.
8. Chip away at my wantlists. SEND ME 2010 UPDATES!
9. Be a better blogger. I'm prone to laziness, as you can tell. But, it's not that difficult to put together a 100 word blog post. Of course, it may not be the most quality material, but it still should be good.

So, these are my goals. Hopefully I can stay focused this upcoming year and continue piecing together a solid collection. See you in 2012!
Posted by Chris Henchey at 11:52 AM No comments:

Merry Christmas to All!
Posted by Chris Henchey at 1:28 PM No comments: 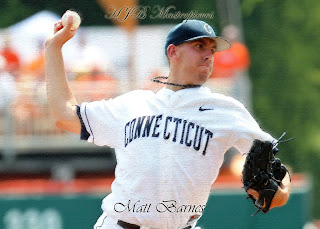 Finals are currently eating my soul right now, so no real time to make any new posts. So I give you a new HJB Masterpieces card: Matt Barnes. First round pick by the Red Sox. My current investment. UConn product. I should get back to studying...or procrastinating.
Posted by Chris Henchey at 11:48 AM 1 comment:

Want to See The Kalish Kollection?

Yes, I've created a Photobucket album for my Kalish Kollection. I have photos (not scans, but I will get scans when I get home for summer) of all Kalish cards I currently own. I will update it when I receive something new. The Kollection is always a work in progress, but it's looking pretty solid so far. Go ahead and check it out!

I will add my Wakefield's and Ellsbury's at a later date.
Posted by Chris Henchey at 10:36 PM No comments:

I'm Violating My Own Moral Code of Baseball Cards

I find collecting enjoyable. I don't look at it as dollar signs and monetary value, I look at it as fun. See what I can get to expand my collection, while spending as little money as possible and selling off what I don't want. I don't like to look at cards as investments or money making devices. I feel it takes the fun out of collecting.

However, I have violated this "policy" as of today. Today, I learned that I am the highest bidder of a Matt Barnes autograph, from the recently released BDP&P. I have wanted to avoid having baseball cards as investments. But, I am currently very cash strapped. I'm making a little money here and there, but there is no sustained income. So, I have decided to start a Matt Barnes Stash (as they call it on FCB). Barnes, out of UConn, was selected 19th overall by the Red Sox and looks to have a promising future. Plus, his base autos average under 10 bucks right now. Now, this won't be a big stash, I don't have the budget to acquire 15 base autos, 10 refractor autos, 8 blues, 5 golds, 3 oranges, 2 purples (yes, they have purple refractor autos now), a red, and the superfractor. It will be something like a handful (3 or 4) of base autos and maybe a refractor. Hopefully it's enough to profit and be able to keep one.

I know, I'm violating my own moral code of baseball cards. BUT I NEEDZ TEH MONEYZ! Now excuse me while I return to school.
Posted by Chris Henchey at 12:08 PM No comments:

Links to Other Places

Chris Henchey
One who currently devoted to running fast and the study of transit, urban development, and photography (smashed into one). Oh, and other things. 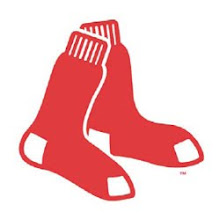